Physiological functions of glucocorticoids in stress and their relation to pharmacological actions.

Thanks to Munck A, Guyre PM, Holbrook NJ. for this article

Almost any kind of threat to homeostasis or stress will cause plasma glucocorticoid levels to rise. The increased levels have traditionally been ascribed the physiological function of enhancing the organism’s resistance to stress, a role well recognized in glucocorticoid therapy. How the known physiological and pharmacological effects of glucocorticoids might accomplish this function, however, remains a mystery. A generalization that is beginning to emerge is that many of these effects may be secondary to modulation by glucocorticoids of the actions of numerous intercellular mediators, including established hormones, prostaglandins, and other arachidonic acid metabolites, certain secreted neutral proteinases, lymphokines, and a variety of bioactive peptides. These mediators participate in physiological mechanisms–endocrine, renal, immune, neural, etc.–that mount the first line of defense against such challenges to homeostasis as hemorrhage, metabolic disturbances, infection, anxiety, and others. Contrary to the traditional view that glucocorticoids enhance these defense mechanisms, however, it has become increasingly clear that glucocorticoids at moderate to high levels generally suppress them. This paradox, which first emerged when glucocorticoids were discovered to be anti-inflammatory agents, remains a major obstacle to a unified picture of glucocorticoid function. We propose that stress-induced increases in glucocorticoid levels protect not against the source of stress itself but rather against the body’s normal reactions to stress, preventing those reactions from overshooting and themselves threatening homeostasis. This hypothesis, the seeds of which are to be found in many discussions of particular glucocorticoid effects, immediately accounts for the paradox noted above. Furthermore, it provides glucocorticoid physiology with a unified conceptual framework that can accommodate such apparently unrelated physiological and pharmacological effects as those on carbohydrate metabolism, inflammatory processes, shock, and water balance. It also leads us to suggest that some of the enzymes rapidly induced by glucocorticoids, such as glutamine synthetase, detoxify mediators released during stress-induced activation of primary defense mechanisms. These mediators would themselves lead to tissue damage if left unchecked. 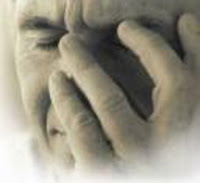 In some ways, we are not so different from a zebra on the Serengeti. If we are threatened with bodily harm, just like the zebra being chased by a lion, our adrenal glands kick into high gear and secrete adrenalin and glucocorticoid hormones. These hormones can keep us alive in an emergency. Blood rushes to our most needed organs (heart, lungs, muscles). Digestion shuts down and we stop salivating. Our attention gets very focused. We have no need to get an erection or urinate (save that for later if we live). These fight or flight hormones can keep us alive in an emergency. But they are meant to turn off quickly when the event has passed. Where humans differ from animals is that we can suffer from chronic worry and keep those hormones surging through our system for days on end. Heart disease, depression, diabetes, obesity, immune dysfunction, learning disorders, headaches, irritable bowel syndrome,… what do these diseases of modern man have in common? They have all been linked to chronic stress. And chronic stress means we have cortisone affecting our organs and cells when it should be turned off.

Robert Sapolsky, a brilliant Stanford neurobiologist and author of “Why Zebras Don’t Get Ulcers” and “A Primates Memoir” has studied baboons in Africa for decades. Doing elegant controlled studies of these social animals, he has come to some amazing conclusions that may explain how humans respond to chronic stress. He found low ranking baboons with fewer opportunities in baboon culture and less control of their lives had more stress hormones and more disease. He also found that baboons with social support, even if they weren’t at the top of the hierarchy, had lower levels of harmful stress hormones. The baboons that could count on other baboons to help them out in a fight, groom them and let them hold the baby, had less harmful stress hormones, even if they weren’t the alpha baboon. He also identified personality traits associated with low stress, even in the low ranking baboon. Certain baboons seemed to be unable to differentiate what was a danger and what was a non-threat in the environment. The “don’t sweat the small stuff” baboons thrived compared to their hyper-anxious buddies.

Like his baboon studies, many human studies have shown that a sense of loss of control in our lives is extremely stressful and children who live with constant violence and fear, suffer from the post-traumatic stress disorder. People who feel they can’t control their lives, who worry about the mortgage, the evil boss at work, or even the state of world events, run the risk of having stress hormones that are surging and impacting their immune systems in diseases that show up much later.
It takes a great deal of focus and attention to reduce stress and quit worrying.
Just saying “quit stressing out” or “relax” might even cause more stress.

Mice missing a specific protein from their brains react to stress differently. The genetically engineered mice develop an imbalance in a hormone involved in stress responses, and during stressful situations, they behave as if they are depressed. Genetic variations in the same protein may be a significant cause of human depression, according to researchers at Washington University School of Medicine in St. Louis.

Their report will be published in the Proceedings of the National Academy of Sciences, appearing on-line at the journal’s website during the week of Dec. 27 to 31, 2004, and in an upcoming print issue.

“A major obstacle to understanding depression has been finding what triggers its onset,” says Maureen Boyle, predoctoral fellow and first author of the report. “We felt it was important to look at elements that regulate the body’s stress system.”

In response to stress, the brain signals the adrenal gland to release hormones, including glucocorticoid, a hormone that preserves physiological equilibrium in many organs. Because proper levels of glucocorticoid are important for normal function, the brain closely monitors and regulates the hormone.

People with major depressive disorder release excessive amounts of adrenal hormones, including glucocorticoids, possibly because of their brains sense stress differently, according to the researchers.

“We wanted to find out if depression stems directly from the inability to sense glucocorticoid in the brain,” says senior author Louis Muglia, Ph.D., associate professor of pediatrics, of molecular biology and pharmacology, and of obstetrics and gynecology. “To test this, we developed an animal model that would tell us if changes in glucocorticoid receptor function could impart the animal equivalent of depression.”

The researchers engineered mice that lose glucocorticoid receptors from their forebrains, specifically from the cortex and hippocampus, beginning at about three weeks of age and continuing until they reach a 95 percent loss at six months. The team felt the gradual loss could simulate the time course typical for the human development of depression, which commonly begins in late adolescence.

The abnormal regulation of glucocorticoid in the engineered mice indicates that glucocorticoid receptors in the cortex and hippocampus—forebrain regions associated with higher thought, memory, and emotion—regulate adrenal hormone levels. This regulatory role for forebrain cells has not been previously proven.

Using the engineered mice, the researchers next will seek genes that interact with glucocorticoid receptors and investigate the mechanism of action of antidepressant drugs. The projects will provide a fuller understanding of the underlying causes of depression and could lead to the development of new, more effective antidepressants, according to Muglia.