Skip to content
John Harris was my friend and a great bodywork teacher. I met John at BTI. He taught his classes with a sense of humor and was very knowledgeable with a teaching style that was very clear and concise. John was one of the best teachers that I have ever had. He treated all his students equally and I always looked forward to going to his classes. John had x-ray bodywork vision. I remember being in class with him and he was sitting way across the other side of the classroom. We were doing student massage, practicing what he had just taught us. Sitting down he says’s “Nicola put a little more pressure to the left” and I thought to myself that this guy has x-ray vision.  I will always remember him and try my best to live up to his bodywork standards and help keep his bodywork legacy at BTI. We all love you John at BTI and will miss you dearly. Adventurer, traveler, and smarter than the president, John Steven Harris aka “Harry” passed with his irreverent sense of humor, incredibly open heart, and wordplay intact to the very end. Kind to the poor and mean to the rich, John’s clever, urbane and wicked acerbic wit brought him and his hundreds of friends immense joy, as he was always his authentic, truth-teller self, never apologetic and fiercely loyal. In that spirit, prior to his passing, John requested that anyone who cherished him do something kind for somebody they normally wouldn’t do something kind for.

Ahead of his time, John was a somatic educator on approaches to physical and emotional pain and has been an ally in the healing process of thousands of people. As a child, his favorite outfit was his bb gun and cowboy hat, and not surprisingly, he was thrown out of University numerous times before graduating. Fluent in Spanish, John traveled extensively in South America, was once shot at, and was almost kidnapped in Morocco. All fodder for future storytelling.

Throughout his storied career, John was a PR professional at a law school; taught countless students chronic myofascial pain relief in workshops around the planet and locally at Body Therapy Institute; was a massage therapist at the ’84 Olympics; created a technique for a barefoot sports massage and co-authored a book called “Fix Pain.”

He is survived by his better brother, a.k.a “the good son”; three natural children who he felt were better looking than he, but not as smart; a faux-da; two ex-wives; his formerly alive dachshunds Hildegard and Heidi and his sparkling sense of humor.

An Interview with Instructor John Harris

John Harris has been an internationally recognized therapist and trainer in myofascial therapies for over 30 years. He was an early pioneer of sports massage and is the co-author of the book Fix Pain. He currently teaches for the Santa Barbara Body Therapy Institute and conducts a private practice in Trigger Point Therapy. In an interview, I asked him about his experiences.

What has been the most useful modality for you?

Well, whether with Olympic athletes, colicky infants, or people suffering long-term chronic pain, trigger point therapy has been the most effective short-term way of ameliorating pain.

What is trigger point therapy?

Most chronic pain, surprisingly enough, has a very simple-to-treat cause. Trigger points are hypersensitive areas in muscles caused by trauma, tension, prolonged overuse. They respond amazingly quickly to direct pressure against these omnipresent microscopic points. In other words, headaches, low back pain, neck and shoulder pain and stiffness, and a huge variety of sports injuries have as a causative factor myofascial trigger points. The good news is that they are easy to treat once you learn the referral patterns that trigger points cause.

John, can you give an example of trigger point therapy working with an athlete?

Sure. Sonia Ross, a team Kalyra member, who teaches for you now, had a knee injury that had effectively finished her cycling career. She thought she was done. I gave an introduction to trigger points in her Swedish massage class and she came to me afterward and said, “Can you help?” As usual, because the therapy is harmless and will cause no further damage, I said, “Sure, let’s do it”. Because she had, trigger points in her knee, probably caused by the rigors of being a bicycle messenger in San Francisco, the treatment was effective. After the first session, she got immediate relief, after several more sessions she was back training on her bike. Since her trigger point sessions, her team has gone on to win the Race Across America three times and she has won five national championships.

The good news is, if the therapy is not going to work, you know immediately. That is really important. It doesn’t require faith or unlimited financial resources to learn whether trigger points are the main problem. One or two sessions with an experienced practitioner will let you know whether it will work or not. If trigger points are the problem, then the administration of a simple direct pressure therapy will cause an increase in the pain temporarily and after 15 or 20 seconds of pressure, on release, the pain will be greatly diminished or gone. Janet Travel, (President John Kennedy’s physician), along with space medicine expert David Simons wrote two magnificent texts on trigger points. While a medical modality, it is nevertheless rarely used in allopathic medicine. It’s astounding to me that it is overlooked when it so quickly effective, in the cases of chronic pain.

Have you found it successful in addressing low back pain – the number one reason people miss work?

If they are lucky enough to have a job? Absolutely, in my experience over 30 years. Ninety percent of back pain is muscular, and of that 90 percent, the great majority is caused by trigger points. Addressing three muscles, one in the low back and two in the hips with prolonged pressure into the muscle at the site of the trigger points will result in most cases in a complete cessation of pain. As I stated before, the proof is in the pudding. You are either much better or not.

How can treating trigger points help when there are degenerative disk problems?

Radiographic findings, X-rays and MRIs, often show deterioration, degeneration, and spinal anomalies. In our experience, these are not necessarily the cause of the pain.

Can you give us an example of that from your practice?

Yes. Erick Hudson’s recovery from debilitating back pain is another example from your faculty. In 2004, he had a significant back injury that left him doubled up in a fetal position from pain and unable to straighten up. He was diagnosed with stenosis and degenerative disks and went through a series of three epidural injections of cortisone in the lumbar spine, yet continued to experience debilitating back pain for the next two years. Two years later he took a trigger point class with me and got some private sessions. After two sessions, he was out of pain and has not needed any further medical intervention. Even though he had an accurate diagnosis of his spinal column, it was not the source of his pain. As in many cases of chronic pain, Erick needs occasional treatment. It’s not always a cure, but it is always effective in obliterating the pain. So every three or four months he needs another 20-minute treatment — in lieu of surgery with a very uncertain outcome.

Is there a self-care component to trigger point therapy?

Yes. The exciting news is with the great majority of clients, they can be taught to use self-care and treat their own trigger points. So rather than waiting for an appointment, home self-care is immediately available. [This is] especially true in cases of migraines, tension headaches, low back pain, and pain on neck rotation. These are all examples of things that are easy to treat at home.

Is that something that anyone can do for themselves?

Children can even learn self-care.

To learn more about trigger point therapy, John Harris will be instructing a class series for bodyworkers and laypeople beginning Thursday, April 21, from 9 a.m. to 1:30 p.m. at the Santa Barbara Body Therapy Institute. To learn more, visit sbbti.com or call 966-5802.

THE definitive book on barefoot bodywork

You must get this book! John Harris not only shares his vast knowledge on the subject of bodywork, but he does so in a very straight-forward, clear, logical way in this book. I’ve been a Barefoot practitioner for 3 years now after having taken his course and 98% of my clientele visit me on a regular basis – weekly or monthly. Had I not learned this method, I would have had to retire from massage therapy, due to chronic tennis elbow aggravated by traditional table massage. 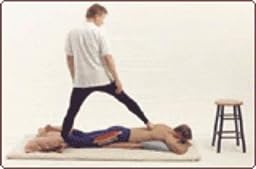 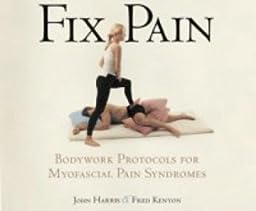 Teaches how to Fix Pain

This book explains an amazing way to give a deep tissue massage with myofascial release and trigger point therapy while saving the therapist’s hands. For modern big clients, people in rehab, back pain patients, this is very valuable. It does in a minute what Rolfing takes much longer to accomplish, without the stressed thumbs and elbows. No table required, no oil, with clothes on. I ended up taking several classes from the author, and some of my clients are converting to it.