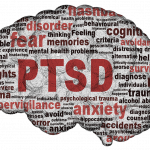 “Many studies indicate that more frequent and more intense involvement in combat operations increases the risk of developing chronic PTSD and associated mental health problems,” reads a statement on the Web site of the U.S. Department of Veterans Affairs. “Initial evidence indicates that combat operations in Iraq are very intense. Soldiers in Iraq are at risk for being killed or wounded themselves, are likely to have witnessed the suffering of others, and may have participated in killing or wounding others as part of combat operations. All of these activities have a demonstrated association with the development of PTSD.”